Important: Exemplar LINK will be unavailable between 12:00pm AEST June 11/9:00pm CDT June 10 and 12:00pm AEST June 15/9:00pm CDT June 14 so we can complete important system upgrades. We apologize for any inconvenience caused. Please contact support@exemplarglobal.org with any enquiries.
Beginning in 2014 and held every two years in the early spring, the iNARTE Aerospace & Defense ESD Training developed exclusively by Bob Vermillion, CEO and founder of NASA industry partner RMV Technology Group LLC, has offered a five-day “hands-on” instrument-driven program at NASA Ames Research Center. Participants from the United States include NASA, the Department of Defense, the Department of Energy, and support contractors.

The 2020 training was cancelled repeatedly during the pandemic; eventually, more than a year later, the decision was made to go virtual. Because the hands-on program had been so successful for RMV, the participants did not initially believe that the virtual training would ever replace it.

Originated by Vermillion more than 12 years ago, the hands-on training was initially rolled out for the Industrial Technology Department of California Polytechnic State University, San Luis Obispo. RMV came out smiling after the iNARTE Space & Defense “makeup” class. Vermillion was awarded a Certificate of Excellence by NASA for his unique training style in a live, virtual platform designed to teach students how to protect ultra-sensitive devices in extreme environmental conditions. 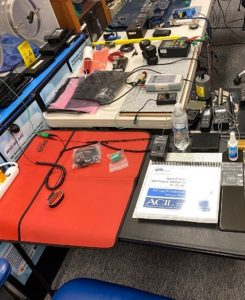 From the initial hands-on training in the early 2000s, the industry has followed in Vermillion’s footsteps. Today, the trend is to embed a webinar platform—called out as “Virtual”—which has led to disappointment by many who seek alternative sources for learning due to continuing travel restrictions. The excellent reviews from last month’s virtual training attest to the innovation and hard work by RMV in developing a unique and effective ESD “hands-on” virtual training program. Remote learning specific to this type of customer was proven to be very effective.

The most important takeaway is that ESD integrity must be traceable to industry standards, unlike the current trend, which is to rely on technical reports (TRs) that only verify a sample on a desktop without traceability. An effective ESD program today requires following standards such as those from ANSI/ESD, NASA, or MIL-STDs for traceability and to ensure the reliability of ultra-sensitive devices.

Interested professionals can learn more about the new and upcoming iNARTE ESD international certification courses for the iNARTE Space & Defense ESD Program Monitor (federal) and the iNARTE Electronics Industry ESD Coordinator (commercial) for iNARTE certification. RMV, in partnership with Exemplar Global, member of the ASQ family of companies, is the global third-party certifying agency that provides iNARTE certification for RMV customer-specific programs. RMV Technology Group is the exclusive developer and training directorate for the iNARTE program certification, from space & defense to the commercial sector.

For more information these RMV training programs, please contact Renee Mitchell, president of RMV Technology Group LLC, via phone at 650-964-4792 in the United States or via through at renee@esdrmv.com.