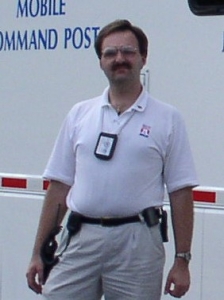 This month, we celebrate the career and achievements of John MacLean, whose inspirational story is testament to hard work, goal setting, and certification.

MacLean started his career in technology as an apprentice electronics technician in the Philadelphia Naval Shipyard’s Apprenticeship Program.

“While working with master technicians I was told that iNARTE certification was something I should get after completing my training,” MacLean said. “I took the mentorship of these seasoned technicians seriously and put certification as one of my future goals.”

From here, MacLean went on to work as a civilian electronics technician on ships and manage radio assets for various emergency departments for the City of Philadelphia’s communications division. During this time, MacLean was inspired to become competitive to weather employment downturns—which led him to pursue iNARTE certification.

“While working as the duty radio technician at the Philadelphia Police Department 911 Radio Dispatch Center, I set about getting my FCC General Radio Telephone license and using that knowledge to build on toward my first certification, which was iNARTE Telecommunications Technician,” MacLean said. “Within a year I had both credentials and set myself on a path to acquire additional technical certifications.”

Following this, MacLean worked for the City of Philadelphia’s Office of Emergency Management—a role that he says is one of the most interesting jobs of his career.

“In less than a year our office would be the focal point for Homeland Security for the City of Philadelphia and the entire Urban Security Area identified by the federal government. I would rise to be deputy director in charge of IT and emergency communications.”

As a technical specialist, MacLean has had some interesting opportunities to grow.

“A problem I faced working with my sworn police and fire counterparts was a general distrust of technical professionals. I decided to become a first responder to build my credibility. I learned emergency scene response and command and control, and eventually became a team leader and trainer for response teams in Philadelphia emergency management.

“My advice to someone building their career is you may be the smartest person in the room as far as your area of technical expertise; however, one of the biggest benefits if you work with non-technical counterparts is acting as a translator for the limits of the technology being employed. Once your counterparts trust you to translate the technical into plain English, you will be worth your weight in gold.”

In 2008, MacLean took his career to the next level and began working for the Federal Emergency Management Agency (FEMA) as the disaster emergency communications coordinator. In the same year he was approached to return to the Navy Reserve and was offered a direct commission as an officer.

“Officers are appointed by the President of the United States and derive their authority from that office. Having previously served as an enlisted sailor, rising to the rank of Petty Officer which is equal to a Sergeant in other services, and becoming a commissioned officer makes me somewhat unique.”

After several years with FEMA, MacLean moved away from Philadelphia to work for the U.S. Department of Homeland Security Office of Emergency Communications as a field regional coordinator for the eight disaster-prone southern states.

He now resides in Tennessee and travels to deliver public speaking on the subject of interoperable communications to public safety stakeholders, while also assisting states and locals to solve challenges around emergency communications interoperability.

A career highlight for MacLean was being nominated by the US Department of Homeland Security to join the NATO Civil Experts Program in 2014.

“In 2015 I traveled to NATO Headquarters in Brussels to receive my indoctrination training to be a subject matter expert in Emergency Communications and Consequence Management for the alliance.”

While MacLean has had his share of awards and accolades, he strives to maintain his certifications and advance professionally.

“I never lost sight of the importance of technical certification. I worked to upgrade my iNARTE certification to the Senior Level after completing the required years of experience. I recognized that this is a field where you need to continue to educate ones self in order to remain current and creditable. I would go on to complete several degrees as well as obtaining certifications in IT/radio and telecommunications, and emergency management.

“I completed my requirements for iNARTE’s Master Level Telecommunications certification a few years ago. I am currently enrolled in two graduate studies programs to continue to educate myself in technology and professional growth.

“Looking back at the beginning of my career, I would advise those just starting their careers to be flexible.

“Look for opportunities to break out and do something different to grow as a professional. Look for educational opportunities. Any money that I have spent on my education has been returned to me in the form of a raise usually in one to two years. Keep up your certifications as these pay dividends and make you more credible and worthy of opportunities or additional responsibility.

“Nothing takes the place of experience. Certification can help bridge a gap in experience if you are just starting out. Experience comes with time, but certification may get you the job in the first place. Employers and managers recognize the efforts certification takes as a validation of education and are more willing to take a chance on someone that may have less experience because they can see that you care enough about your career to do the hard things.”