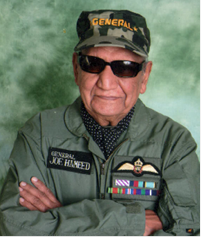 This month, we are proud to celebrate the career and achievements of General Joe A. Hameed M Sc.

General Hameed is a microwave specialist and has been an active member of the Institute of Electrical & Electronics Engineers (IEEE) since 1991 and has been awarded lifetime membership.

Throughout his career, General Hameed worked on several microwave communication projects before joining Hewlett Packard in England as a group leader of the microwave department.

While now officially retired, General Hameed works from home under the name of SMP Telecommunication Services.

“I prepare special training as required by my clients on test and measurements, testing and commissioning of communication systems such as mini microwave links and radio base stations,” General Hameed said. “[I also offer] EMC/EMI regularity and compliance testing for various standards including MIL-STD-461F and DO-160 Lighting Effects using Transients Generators.”

Throughout his career, General Hameed has worked across many areas of expertise including radio frequency and microwave systems, and calibration and certification for customers such as airlines, defense, and police. He has also worked in numerous countries including the United Kingdom, Canada, and Saudi Arabia.

General Hameed’s began his career in 1951 as a general duty pilot (GDP) for the Royal Air Force in England.

“Meaning, when one is not flying, he can be assigned for other duties,” he said.

“One was the mission in Marine Shah Fort close to Afghanistan border,” he said. “There were two fighter aircrafts kept ready for action in the fort. When the big double door of the fort was opened it led to a runway. It was nice to take off in the fighter aircraft after the successful mission and landing the taxi fighter back in the fort. These missions were performed during daylight. As there was no ILS and marker bacons.”

After the Royal Air Force, General Hameed worked for RCA Victor in the United States on the CENTO microwave communication project connecting Ankara (Turkey) to Karachi (Pakistan) through Iran. Next, he took a position with Hewlett Packard as a microwave group leader and went on to serve the organization for 16 years.

In July 1974, General Hameed made the decision to immigrate to Vancouver, Canada. Here, he worked with Microtel Company as they were building a microwave system for Aramco Oil Company in Saudi Arabia, before moving to Toronto to once again work for Hewlett Packard.

“One day I saw a two-page ad saying microwave engineers needed to work on a nationwide communication network. Rockwell Collins Radio were interviewing candidates in Montreal. I called them and they told me to take a flight and come and see them. They offered me a nice package. HP gave me a one year leave of absence for me to join Collins Radio.”

General Hameed’s interest in EMC interest started in 1998, sparked by rapid improvements in technology. Soon after, he took an exam from IEEE on EMC /EMI and passed. In June 2016 Hameed sat in an eight hour examination offered by iNARTE—without much preparation—and passed with flying colors.

“I took a leave of absence for one year from Royal Saudi Air defense to work on the fiber communication network from LA to Colorado Springs for Alcatel. This was a new technology to learn.

“When I reported to management for information and assignment to work on the fiber system. A technical senior manager told me that I had lot of experience in radio frequency. We have a serious problem with our high-density fiber transport system failing the Belcore 1089 EMC test. Here is the airplane ticket. Go to Under Writer EMC Lab in North Carolina and take a look at the problem. I went there and looked at the problem and I could not do anything there. I shipped the equipment back to Dallas to work in their EMC LAB.”

Reflecting on his working life, General Hameed offers the following advice to those just starting out in their career: “My advice is whatever you decide to do, do it fast. Don’t be shy to ask for help. Share your knowledge with others.”

Click here for more information about General Hameed. Here, you will also find a letter from ALCATEL under the “reference letters” tab.