In July, the U.S. Navy launched an F/A 18F from the deck of the USS Gerald R Ford (CVN-78) utilizing the latest in launch technology. The new system, scheduled for full deployment in 2019, uses electromagnetics rather than traditional steam for its catapults. Not only did the milestone mark the ship’s first at-sea fixed-wing flight operations, but it was also the first shipboard test of both the new flight deck system Electromagnetic Aircraft Launch System, or EMALS and the Advanced Arresting Gear, known as AAG.

EMALS and the AAG system fine tune the forces they put on the airplanes taking off or landing based on their weight and size. This allows the carrier crew to most efficiently launch and recover the aircraft without putting undue stress on the airframes. This is meant to reduce maintenance on the airplanes and extend their service lives as well as allow for both larger and smaller aircraft to be used on-board the ship. When used together, the systems even work with unmanned drones, thereby keeping service men and women from potentially volatile areas, while still allowing for aerial support.

The carrier left Norfolk, just off the Virginia coast, to conduct the first arrested aircraft landing, or “trap,” followed 87 minutes later by the first ever catapult-shot launch using the new systems, per a press release from Naval Air Forces Atlantic.

For decades now the U.S. Navy has used steam to power its carrier based launch systems for aircraft deployment. The systems are notoriously dangerous, require tremendous amounts of maintenance, copious amount of space on-board ship, and invariably break down at the absolute worst possible moment. The new EMALS system will allow even the heaviest aircraft to deploy with less stress to the airframe as seen with traditional steam systems. 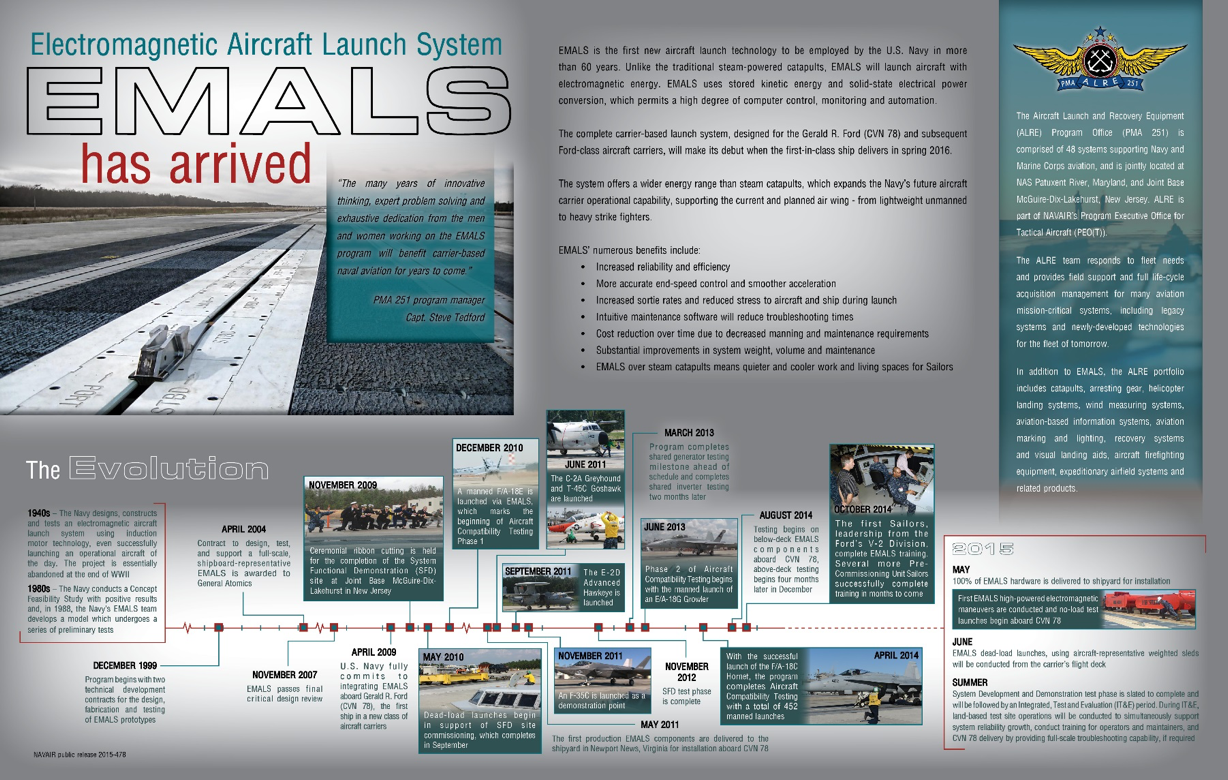 Utilizing a linear induction motor (LIM), the EMALS system uses electrical currents to generate magnetic fields to propel the aircraft along a track and ultimately give the aircraft a high enough velocity to launch. The LIM is made up of a row of stator coils that, when energized, accelerate a carriage along a track. At approximately 300 feet (91m) the relatively small LIM will accelerate a tremendous 100,000-pound (45,000 kg) aircraft to the 130 knots (240km/h, 150mph) needed for launch.

During launch, the induction motor requires a vast surge of electric power that exceeds what the ship’s continuous power source can provide. To accommodate this draw, the EMALS energy-storage system design accesses power from the ship during its 45-second recharge period and stores the energy kinetically using the rotors of four disk alternators; the system then releases that energy (up to 484 MJ) in two to three seconds. The power conversion subsystem releases the stored energy from the disk alternators using a cycloconverter. The cycloconverter provides a controlled rising frequency and voltage to the LIM, energizing only the small portion of stator coils that affect the launch carriage at any given moment. Each rotor can deliver over 120 MJ (34 kWh) and can be recharged within 45 seconds of a launch. Theoretically, this means that the ship could launch two aircraft in less than one minute, which is a vast improvement over the traditional steam catapults which on average deploy one aircraft every two minutes.

Operators control the power through a closed loop system. Hall effect current sensors on the track monitor the operation of the track to ensure that it provides only the desired acceleration. The closed loop system allows the EMALS to maintain a constant tow force, which helps reduce launch stresses on the plane’s airframe and ensures the airspeed is high enough for take-off. In the early days of the steam catapults it was not unheard of, if the pressure was too low, for the aircraft to not achieve launch velocity and thus drop into the ocean. Conversely, if the pressure was too high the nose gear could be torn right off.

Compared to traditional steam catapults, EMALS requires much less “real estate,” less maintenance, and less crew for operation. The system is more reliable, recharges at a faster rate, and uses energy more efficiently. Steam catapults, which use about 1,350 lb (610 kg) of steam per launch, have extensive mechanical, pneumatic, and hydraulic subsystems. EMALS can control the launch performance with greater precision, allowing it to launch more kinds of aircraft, from heavy fighter jets to light unmanned aircraft.

While not without its challenges and concerns, as with any new technology, this type of advancement in electromagnetics will pave the way for greater military functionality and will meld well with the implementation of the US Navy’s future planned all electric ships. Perhaps at some point in the not too distant future, we will see EMALS used to launch civilian aircraft or perhaps even see the system used more by NASA. It may even reach a point where it will be possible to launch spacecraft into orbit.